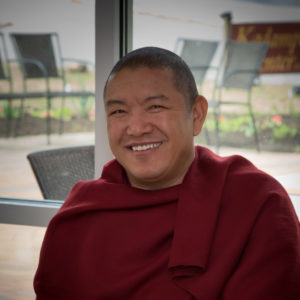 Geshe Gelek Chodha was born in Sikkim, the oldest of five children. At the age of seven, Geshe-la went south to live at Sera Jey monastery and become a monk. He achieved the degree of Geshe Lharampa in 1997, continuing on to the Gyumé Tantric College to learn the intricacies of tantric rituals. Kyabje Zopa Rinpoche—at the suggestion of Geshe-la’s classmate Yangsi Rinpoche—requested Geshe-la to come to Kadampa Center in Raleigh, NC as resident teacher in 1999. Since then, the members of Kadampa Center have been privileged to have Geshe-la as their spiritual friend while he teaches the Buddha Dharma with sincerity, humor, and patience. His accessibility and constant experimentation with recently-acquired English idiomatic phrases is eternally endearing to his students. In addition to Kadampa Center, Geshe-la teaches regularly in Latin and South America and Europe.